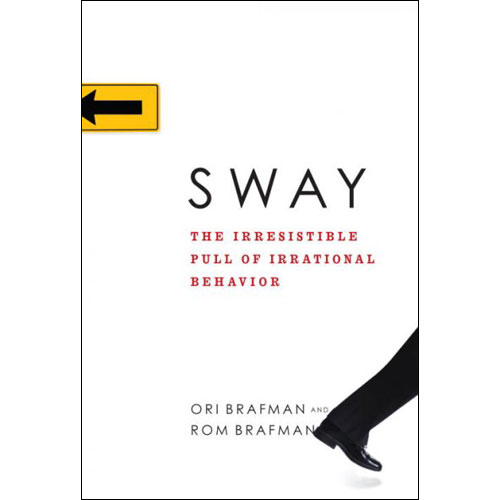 Sway is one of the first books I’ve read on human behavior from our modern era (not Freud or Kierkegaard or a classical philosopher like Boethius).  It’s a mainstream, pop culture look at why people behave in irrational and illogical ways so often in life.  The ideas in this book ranged from the common (unwillingness to sell a stock that is plummeting in price) to the rare and tragic (the worst aviation crash in history that killed 583 passengers in Tenerife).  The authors, Ori and Rom Brafman apply several theories to each situation in order to shed light on it.  Here are just a couple examples:

You may not have heard of the Tenerife crash (or did you just watch Breaking Bad?), but it remains the worst crash in aviation history, with 583 deaths.  The unexpected part, as the Brafmans explain, is that the pilot who caused the crash was highly experienced and head of KLM’s safety program.  He even appeared in KLM advertisements thanks to his good looks and excellent flying record.  It seems unthinkable that someone like Captain Van Zanten would take off without takeoff clearance, but he did.  And it was the powerful momentum of loss aversion (he wanted to avoid a potential loss – which was a certain overnight stay on Tenerife if he could not takeoff before his mandated rest period began) along with several other factors that the authors explore that swayed Van Zanten into making such a dangerous decision.  As the first story in Sway, it is linked back to often as other ideas like commitment (we are committed to ideas and strategies we have always taken before), and greater perceived losses, can make us even more loss-averse.

Another powerful idea in the book that is relevant to all of us changing the way we spend our money is value attribution.  It’s defined as “the tendency to imbue someone or something with certain qualities based on perceived value, rather than on objective data.”  Think of it as the Groupon effect.  Have you ever noticed that when you get something for an incredible discount, you start to doubt it?  Maybe it wasn’t worth that much after all or there’s something wrong with it!  There are several examples given in the book, from anthropologists rejecting important discoveries to Joshua Bell performing on the steps of a DC Metro station that will surprise you, but not by much.  We’re all guilty of it.

Diagnosis bias is a derivative of value attribution and refers to the phenomenon where we continue to use our initial value judgement of someone or something long after we made them.  The most haunting example in the book was of an ER room that continued to send a mother with a sick child home because they perceived her to be a prototypical over-worrier.  You want to think that ER doctors and nurses would not allow their judgments to get in the way of their duties, but that is exactly what happened.  This can happen often in our daily life- the way we view the people we are closest to, the activities that we think are beneficial or important but in fact may not be (like using a credit card for emergencies) and this chapter can help you reconsider some of your most ingrained approaches to life.

I recommend this book for anyone who wants an entertaining, informative read on human behavior.  The book discusses psychology, social phenomenons as well as culture and economics with ease.  Besides the ideas discussed above, there are chapters that consider what our ideas of fairness and equal compensation are and how those change in different cultures.  Some examples were not as in-depth as they could have been, the ideas of the book will stay with you and you may find you are able to ask yourself “What exactly am I thinking here?  Maybe I should reconsider before I jump into this.”  It’s infotainment at its best.  I approach books like Sway not with the idea of “Oh, look at us people, we’re so screwed up” but more of a “People are so fascinating, we think alike a lot more than it would appear at first glance”.

Let me know if you get a chance to read it!