I’m on a mission to read five classics in personal finance. I’ve decided upon these five, with a plan to review each for American Debt Project. Get ready to be educated, son!

1. The Richest Man in Babylon by George S. Caslon

2. The Millionaire Next Door by Thomas Stanley and William Dank

4. A Random Walk Down Wall Street by Burton Malkiel

5. The Intelligent Investor by Benjamin Graham

Let’s start with The Millionaire Next Door because I just finished it. 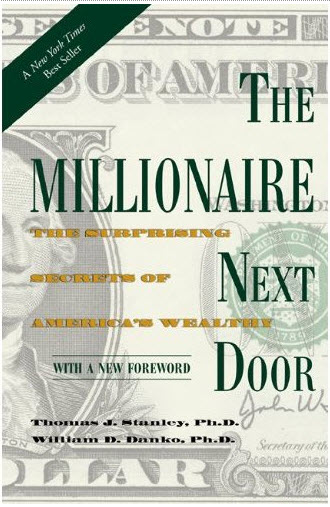 The Millionaire Next Door

(1996) is the work of two marketing professors with doctoral degrees, who happily confirm that people holding doctoral degrees tend to be less wealthy, because they generally got a much later start on acquiring wealth. Wait, who do we consider to be “rich” or “wealthy”? Here it is defined as more than $1 million in net worth, and many of the respondents were in the $1-$10 million net worth category, with over 80 percent of America’s millionaires being first-generation rich (self-made). Authors Stanley and Danko interviewed a ton of these millionaires over many years to come up with seven important conclusions about America’s wealthy.

What are the seven common traits of America’s millionaires?

1. Living well below their means. Using a ton of survey data, these millionaires tended to show, on average, that they did not buy the most expensive or even very expensive cars, watches, suits or shoes. Only 25 percent of the millionaires surveyed own a watch that cost more than $1,100. WHAT? Really? I thought everyone agreed that once you get rich you go out and buy a Rolex…that was even on my financial to-do list! “#43. Go out and buy a Rolex”. Hmm, I’ll have to cross that off the list.

2. They use their time, money and energy in ways that will build wealth. Millionaires spend much more time planning their investments and getting the best advice from CPAs, attorneys and financial advisors.

3. Financial independence is more important than “displaying high social status”. It takes a lot of money to live in a fancy neighborhood, drive luxury cars, take expensive trips and eat at three-star Michelin restaurants. Millionaires spend less money on status and more on assets that appreciate.

4.Their parents did not provide for them. The authors refer to it as “economic outpatient care”. Can you tell they don’t care for it? Relying on parents for financial assistance into adulthood does not make most people wealthy. In fact, it makes them less likely to be wealthy and more dependent on their parents for support.

6. They target market opportunities. This wasn’t covered in depth, but it is the idea of finding opportunities to market a product or service to an interested audience, such as the affluent.

7. They chose the right occupation. Nothing is guaranteed, but the authors discuss a variety of occupations and businesses that are profitable fields. Most first-generation millionaires are self-employed or business owners, which gave them the time to plan their investments as part of their regular activities.

The book went into depth with each of these ideas and challenged my idea of what being wealthy is. The distinction is clearly drawn between high-income and high net worth. You can have a high income and little net worth. Or your income can be modest and you can have a better than average net worth thanks to your wealth accumulation habits. The authors discuss two types of wealth accumulators, the UAW and the PAW.

The authors referred to UAWs versus PAWs throughout the book. The under-accumulator of wealth (UAW) was the person whose net worth was below what it should be based on their annual income. Want to know how to calculate what your net worth should be?

A Good Net Worth Rule of Thumb Equation

How did you do? Mine was TERRIBLE! I have about 1/10th of my expected net worth. Even if I took a lower income, say, what I was making two years ago versus today, I still only have about 1/8th of what I should have. So I’m what the authors would call a UAW. The PAW (prodigious accumulator of wealth), on the other hand, meets this equation or has a net worth higher than what is expected of them based on their income. They have excellent saving and investing habits that are reflected in the seven traits above.

The PAWs are shown as those who are planning with an eye towards the future: retirement, children’s education, estate considerations and more. The UAWs are like your flashy European cousin: it’s all untz.untz.untz. (that’s techno music for you old-timers) clubs, parties, driving leased Mercedes and trips to Ibiza with these people. They may certainly be high-income producers, but they spend all of it and more, which leaves little room for wealth accumulation. The UAWs may consider themselves to be of a high social caliber, but the appearances of this social status are more important than anything else. The older UAWs are sending their kids to private school when public schools in the area are fine, learning about fine wines and attending charity dinners and generally looking good no matter what.

The Millionaire Next Door is definitely staying in my top 5 personal finance books of all time. It was extremely eye-opening. Even though I have taken personal responsibility for my spending and finances in this past year, I still think like a UAW. If I just earn more, I can spend more! But that’s not really what it takes to be wealthy. And while a dollar amount of wealth is not important to me, a certain amount of stability is. Planning your budget and your investments regularly, working with the right advisors and staying reasonably frugal will go a long way in building wealth. This book will drive home a lot of those ideas as you continue your journey.