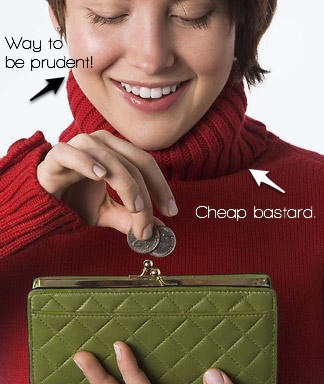 When was the first time you heard someone referred to as cheap? Or did you never hear people being called cheap, but instead praised for being frugal, practical or resourceful? I’m starting to think the whole way you view money is based on the words you use (and the people around you used) to associate with its different aspects. Uncle Jack drives an old car and never buys himself new shoes until the old ones wear out. “He’s so damn cheap!” OR “That’s true but he’s socked away enough to take his family on a cool vacation every year. And the kids already have fully-funded tuition funds! Smart guy, that Jack.” If we always hear that the guy who saves money is cheap or miserly, we may never realize that those habits are part of a bigger overall money plan. In English, we often use words like:

When that person could very well be:

There are certainly occasions when people might be cheap. It might make more sense to just buy a new pair of pyjamas instead of trying to fashion a pair out of free airline blankets. But if someone is buying generic paper towels, packing a lunch, or not financing a brand new car, that’s not being cheap. That’s just called saving money.

I personally like budget-conscious. Doesn’t it sound modern and open? What are you preferred words when it comes to people’s money habits? Did you make one up?! Let’s hear ’em!