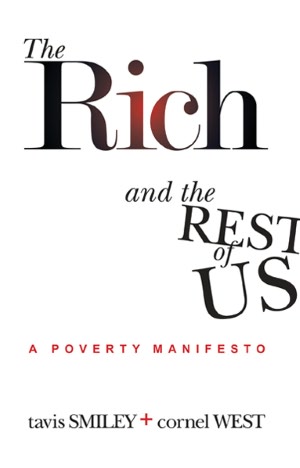 To adapt a line from Bridesmaids, “At first, I did not know that The Rich and the Rest of Us was a book. I thought it was a very long rant that had no point.”

What I wanted from The Rich And The Rest Of Us: A Poverty Manifesto

was an examination of US policy and culture that explained why the US is so lopsided in its wealth and what other countries have done to reduce extreme inequities in wealth (such as Brazil). I wanted to understand what people who are not of extreme wealth or extreme poverty can do to better understand their economy and have an impact on their local economies. I wanted a healthy mix of analysis and history along with some feel-good “action lists” that would remind individuals they still have power, our choices matter, and organization of ourselves and our resources, above all, can create powerful instruments that change what’s normal or what has always been.

Maybe I expected too much.

What I got out of The Rich and the Rest of Us was an endless tirade against corporate fat cats, the mega-rich, the massively rich, and a pervading sense that half of the country is one paycheck (or less) away from utter poverty. While I have no doubt that we are in hard times for a large percentage of Americans, many of us live paycheck to paycheck (You can count me in there, if I wasn’t getting my next paycheck I would be screwed) and wages are stagnant compared to the cost of living, what I don’t agree with is the sense of hopelessness and desperation that West and Smiley try to inject into each person’s story. Each person who they interview is presented as a tragedy. Some parts are left unexplained, key parts of a story which might explain why a person is in poverty, and details about generations of poverty and lack of education are glossed over so that West and Smiley can editorialize all over this book. I am already sympathetic to the cause. In fact, I wager 99% (get it??) of the people who would read West and Smiley’s book are already sympathetic to the cause: we all want to alleviate poverty in this country, we want to give people opportunities and the dignity of a living wage. You don’t need to jam it down my throat that people have it rough out there and people who have been proven to be irresponsible or downright fraudulent during the downturn have received little punishment. I know all that already.

My question is how do we address these problems? What can we change? Why is healthcare prohibitively expensive? Why does a hospital stay have the potential to bankrupt someone? How do we lower housing costs? Can we reduce our transportation costs with better public transportation? Is online education a tool for people to become masters of their own destiny? Should people become more self-sufficient through home gardening and raising our own chickens? I like creative ideas and I think there is plenty out there we can do. We should address problems within our government openly and honestly, but also understand government’s limitations and maybe stop complaining so much (I’m looking at you, KPFK).

A few details that got me all wound up:

There was one great section in this book with ideas on how to reduce poverty. One such idea was for more tenants to become landlords, perhaps pooling resources to buy a small apartment complex and offer shared resources like transportation and a community garden. That sounds so cool! I like the idea of the combined purchasing power of a group and the ability of that group to pay itself in terms of the repaying the mortgage and having an asset of real property. That section on action and ideas was way too short.

I want to learn more about society, policy and be excited about starting conversations with people about why the US is great and why we have the capacity to grow and be stronger than ever. Unfortunately, the conversation gets way too polarized right away and it’s easy to pick a side. The only way we’ll make a difference is by getting rid of the sides and asking questions that aren’t being asked right now. Is the question really “Is Obamacare a good thing” or would it be better to ask “Why are healthcare costs rising much faster than any other factor in the US?” and “What are the structures in place that make insurance providers so entrenched in our national healthcare dialogue? Is it like this in every country? Have we looked at how other countries provide care and how we compare?”

I know you mean well, West and Smiley, but the radio shows and tours seem to be more your forte. My next related book review will be A People’s History of the United States